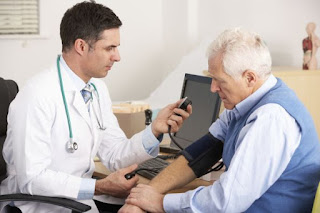 Recently, hypertension has been put again in the focus of attention. The publication in The New England Journal of Medicine of the SPRINT trial has offered a striking evidence of its importance. Even considering that current recommendations about blood pressure control are not met in a substantial proportion of individuals, the SPRINT trial conclusions suggest that a more intensive schedule should be pursued – at least in high-risk individuals -. Previously, the same journal had issued a wider scope article considering the future of public health. 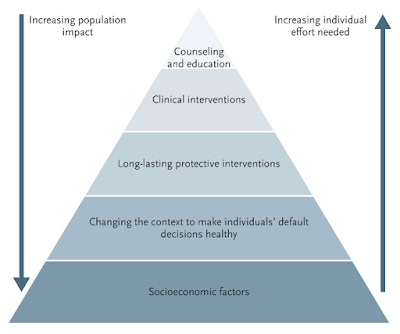 If we have an eye upon this last article, it is interesting to examine the health impact pyramid. It is something known that our action as clinical doctors is not the main influence in the final outcome in health, being socio-economic factors much more important. Having acknowledged this issue, and considering strictly the power of clinical action, probably the most effective one that can be achieved is hypertension treatment and control. In the world of today, it is obvious to say that we’ve got enough therapeutic tools to offer a reasonably good therapeutic approach for the overwhelming majority of cases. Statistics are encouraging: figures for hypertension control in so many places around the world seem to offer a slow – but continuous – improvement.
Nonetheless…
Nonetheless, if we take into account the huge importance of hypertension, what we know about the issue and the means we have to treat it, we still have a large series of barriers for which no easy breakthrough can be anticipated
a) Demographics. In what we call westernized world, population is aging. A lot of people reach an old or very old age, and so the proportion of hypertensive population – and their clinical needs – is growing every year in a steady fashion.
b) It is obvious, but we need to remind it: hypertension is not an isolated condition. It is widely related with age – we’ve already said it -, overweight, lack of exercise, salt or alcohol consumption, psychosocial stress and comorbid conditions, like the diabetes. Each one has got a story of its own and it is the group that creates the outcome. But that’s not all the story. Behind this, you’ve got poverty and unemployment.
c) But let us stay into the plot. We’ve got another problem about hypertension. Obvious and immediate: measuring blood pressure. Doing this to presumed healthy people and to known hypertensives. Who is currently checking blood pressure? Does everybody need to buy a blood pressure meter of his/her own? How frequently should he/she check the meter – and how – in order to know that readings are reliable? Should we check our meters with those belonging to clinical facilities? How do we know that these ones are checked and reliable? Is at risk population advised to check their blood pressure routinely? Where?
d) But, once in the plot, we find the compelling need to control the hypertensive patient. But, as stated previously, he or she has got a variety of other comorbid conditions about which he or she wants to complain before addressing a blood pressure figure of 172/95 mmHg that is not causing him or her any symptom for the time being. So, it must be stated that the hypertensive patient is usually a complex one, taking several drugs, not properly addressed in a ten minutes visit, neither specially prone to a diagnostic sparkle nor to juggling therapeutics. Instead, he or she fits better in the patient and quiet work of everyday, a job that has a difficult recognition by the decision centers, whose eyes seem to be placed somewhere else.
In this sense, it is to some extent surprising the fact that primary care– the level where the greatest deal of this problem is to be addressed – lacks energy, income and social consideration. It is because of this that in so many countries primary care – or the general practitioner or family practice – is a non-preferential option for the youngsters. In Spain, many family practice residents leave the specialty before they end, or they begin another soon after the completion. Probably, they lack the knowledge – and fair recognition – that, as a whole, they constitute the main vector for a country people’s health.
@frelimpio