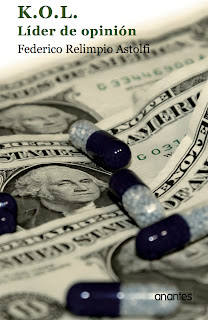 Did you take your pill this morning? Do you really know what you are currently taking and why? The usual answer is: my doctor told me so. Do you know why the doctor chose this pill and not the other? The doctor probably chose the drug in good faith, trusting in his o her key opinion leaders, whose ideas he or she had the chance to hear in lectures or to read in the scientific press.

Didn’t you know that behind these key opinion leaders lies a complex world that dictates that this drug and not the other is to be put into your mouth this morning? Didn’t you know that often this movement leads to a drug substitution that generates no appreciable benefits, occasional risks and considerable increasing costs?

Dr. Relimpio has been devoted to Endocrinology and Diabetes in the biggest public hospital in Southern Spain for more than twenty years. He has decided to break a silence wall and speak openly about the above-said issues in a novel (K.O.L. Líder de Opinión, still in Spanish), that will clarify you some important aspects that maybe you ignore: drug marketing, clinical meetings, misleading messages and a kind of legal practices addressed to put a concrete pill in your mouth, leaving behind any other consideration.

Antonio Ugalde (Professor Emeritus at the University of Texas at Austin): «The reader not familiar to the extremes adopted by pharmaceuticals could think that Relimpio is exaggerating as a literary technique. If he thinks so, he’s wrong. Nothing here is exaggerated  and everything is in touch with what I have read in a variety of sources».

If you are able to read in Spanish, the eBook is available right now. Just click.

K.O.L. (Key Opinion Leader) a Spanish novel seeking an English speaking editorial for a joint venture. A tiny investment to expand the knowledge of a huge social and health problem.